The iTaukei Trust Fund Board (TTFB), the Ministry of iTaukei Affairs (MTA) and the iTaukei Affairs Board (TAB) collaborated to develop a training programme titled Sauvaki Ni Vanua. The Traditional Leadership programme known as Vuli ni Sausauvou is centered on the principle of good governance and strong leadership which:

The training focuses on Traditional Leadership for the Sausauvou, who are traditional heirs to chiefly titles in their villages or provinces. The training is earmarked for all the fourteen provinces of Fiji and later Rotuma. So far, Rewa, Tailevu, Ba, Nadroga, Navosa and most recently, Serua have completed the training.

The programme is hosted at the Centre for Appropriate Technology and Development, at Nadave, and spread over fourteen weeks, divided into three terms of two-week training intervals, with a month break in between these intervals. Participants are transported to Nadave at the start of the training from their villages and transported back at the conclusion of the two-week intervals. They are also accommodated with all meals included, at Nadave for the duration of the training.

There are six components to the training and these are:

The Serua Provincial Office, situated at Naitata, along the banks of the Navua river, administers the governmental affairs of the province. The office was instrumental in securing the province’s Sauvaki ni Vanua training this year. The provinces’ training journey began three years ago, in 2016.

A village profiling exercise conducted by TAB brought to light some weak areas which the Roko Tui Serua, Mr Seru Ratukalou, said “the raw data collected from the village profiling exercise threw out some interesting facts, and highlighted areas like traditional leadership and good governance in the Bose Vakoro, Bose ni Tikina, Bose ni Yasana, economic empowerment and environmental conservation. Furthermore, there were also some inherent challenges to the vanua which included duties and responsibilities, parenting, traditional ties and relationships, culture and tradition”. 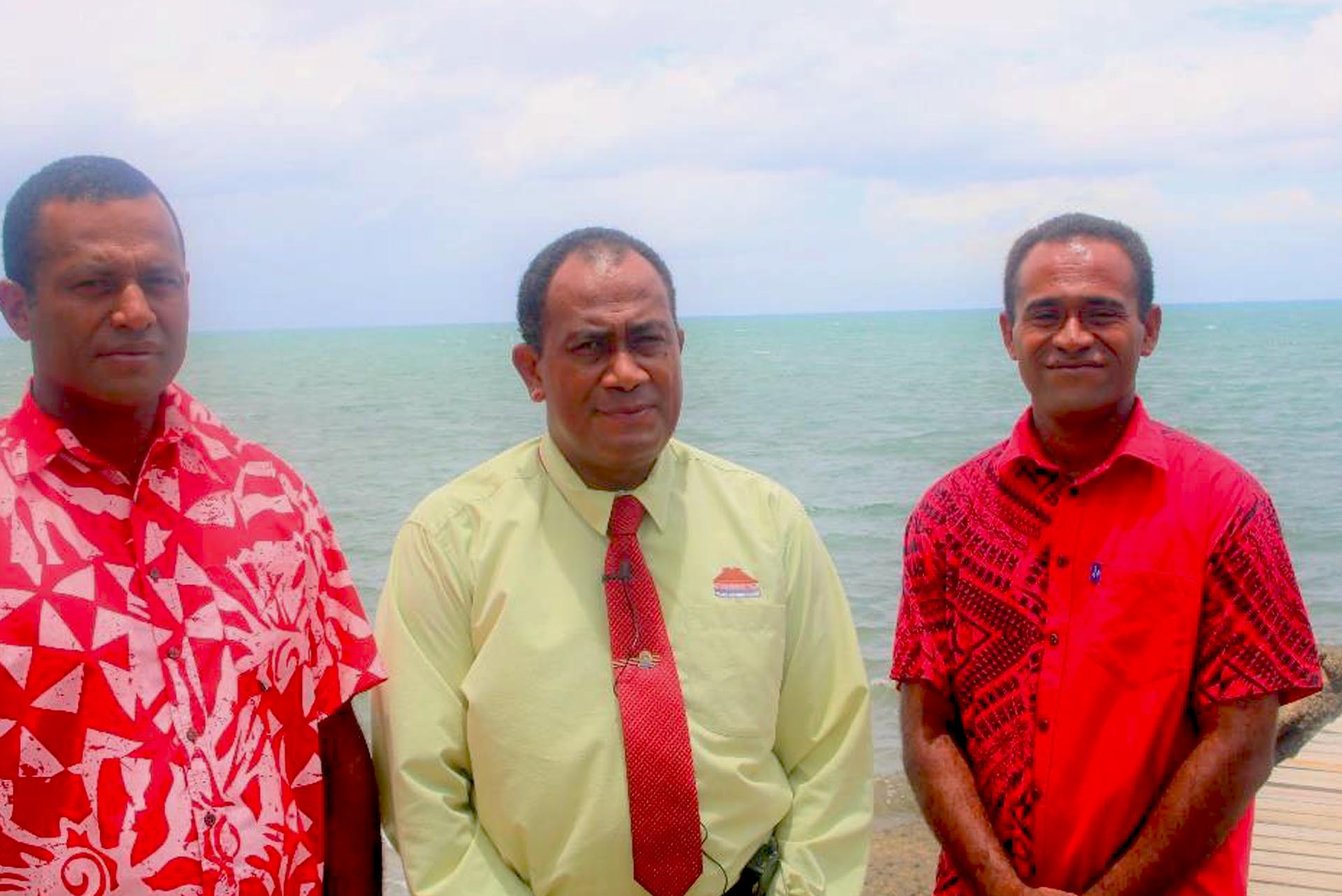 This was something the provincial office actively set out to address. With the village profiling data collated, the council felt that an intervention, through training was needed to address the emerging gaps. So, in 2017 through to 2018, the province started to aggressively look for funding for training. With the funding from donor agencies, they were able to complete the formulation of each village’s Integrated Village Development Plan (IVDP).

“When TTFB showed us the content of the Sauvaki Ni Vanua programme, we were so delighted. Because it was a training pathway for the much-needed skill sets to usher the province into transformational leadership”, the Turaga Roko said.

Majority of the participants’ ages fall within ages of 25 years to 40 years. There is a focus on younger leaders, to grow them to be champions of developmental activities, assisting Turaga Ni Koro’s (village headsmen) within their villages and province, in years to come. As the Turaga Roko says, “when they assume their chiefly leadership roles, they already have a fair understanding of everything. We will also try and sustain these trainees, otherwise lessons learnt will be lost”.

For the province, this traditional leadership training has reinforced a bottom-up approach, with views being gathered from the grassroots level, particularly from women, promoting a collaborative decision-making process. The provincial office, had gone one step further by ensuring that their Sauvaki ni Vanua trainees understood their village profiling and their Integrated Village Development Plan (IVDP), prior to attending the training. This ensured that they were aware of the developmental needs, so that they could take ownership and apply their learnings on these various village projects. 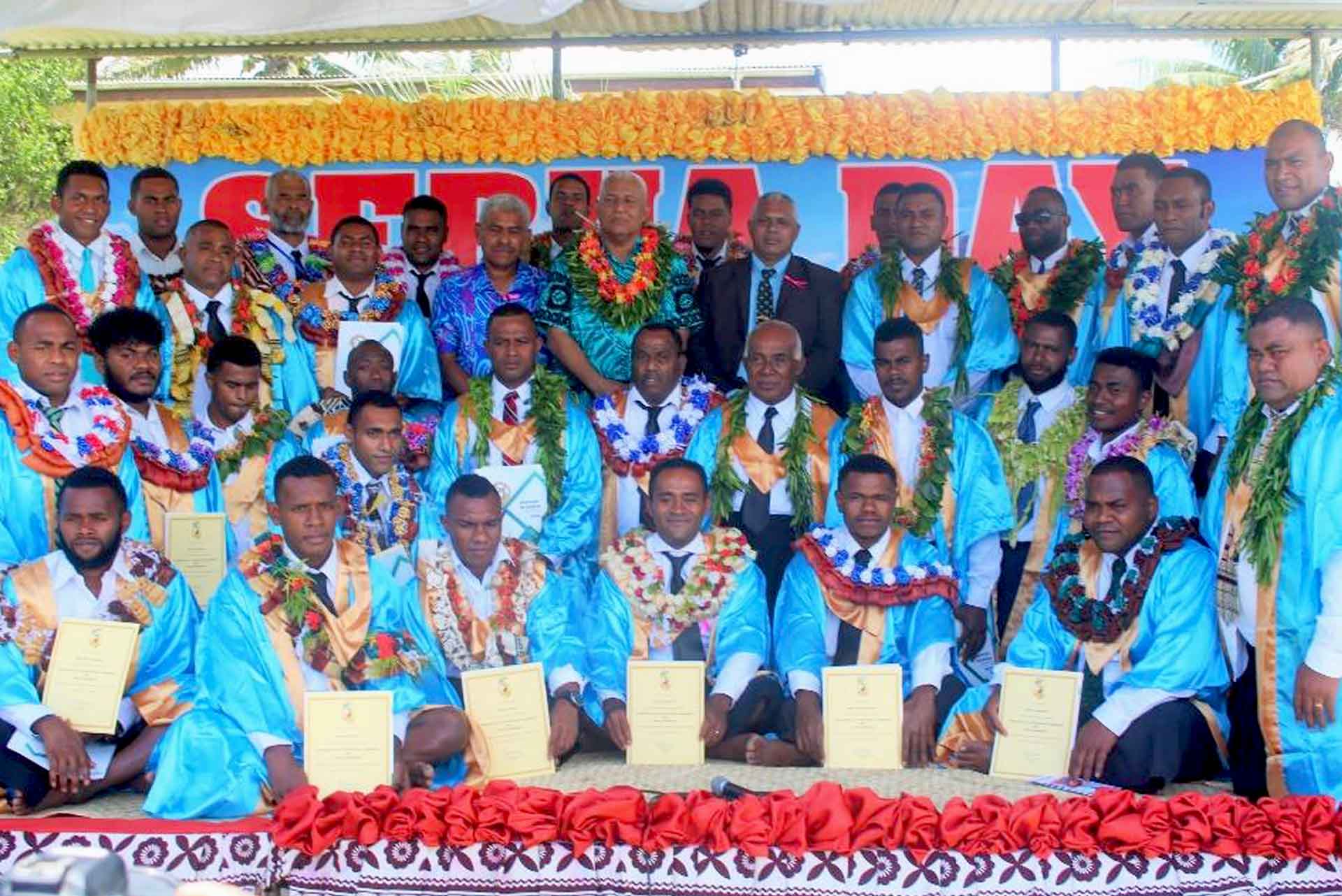 Above: Graduation Day, the thirty-two graduates of the Sauvaki Ni Vanua programme for the Serua province, seen here with the Permanent Secretary of the iTaukei Affairs, Mr Meleti Bainimarama, who was Chief Guest on their graduation day in October 2020.

The provincial office is in the throws of putting forward a project proposal for furthering the training of their Sausauvou through an industrial attachment scheme with key iTaukei institutions and programmes like the iVolavosa, within the Ministry of iTaukei Affairs. These will encourage and empower the Sausauvou to be champions of the revitalization of culture in their villages.

“We are trying to get the Sausauvou to be at the forefront of developmental activities for their provinces, something we term as IVDP champions, assisting with governance issues like helping Turaga ni Koro’s in their administrative duties in the Bose ni Koro (village meeting). As a learning exercise, when we have disputes within the village or province, we want to engage them as observers in the conflict resolution process”, said Turaga Roko.

Although there were no women represented in the 2020 Sauvaki ni Vanua training programme, this is something that the provincial office would like to advocate in the next training opportunity. However, in the context of membership of Provincial Council, the appointment of Ro Aqela Siganisucu Roseru as the first lady in the to be appointed as the Vice Chairman of the Serua Provincial Council will be instrumental in years to come.

“Currently the provincial office is also preparing a Concept Note for submission to the Permanent Secretary of iTaukei Affairs, to further train the Sausauvou for administrative tasks like preparing proposals for funding for various developmental village projects. It’s something we feel they need to be trained on”, says the Turaga Roko. And they are also in discussions with the Methodist Church’s Wasewase Serua to use the Vuanirewa Methodist Training Centre, as a incubation centre, and working closely with Royal Fiji Military Forces and plan through their Intergrated Rural Development Programme to involve the participation of government stakeholders and training institutions, and these will be included in the Concept Note submission.